How Reliable Are Negative Fingerprint Results? 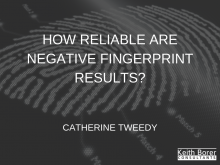 The following is an example of a reported negative result providing a rather different result upon independent examination.

Mr M was a Defendant facing serious charges, which he denied.  Part way through proceedings, he received a blackmail letter demanding money, which Mr M suspected had been sent by a Complainant in the case.

The letter was given to police for forensic analysis, who reported that nothing of evidential value had been found.  No report was produced, which was in line with the fingerprint bureau’s policy.  The bureau did not undertake any comparisons with fingerprints from the Complainant.

Mr M’s solicitor contacted us for a second opinion and arrangements were made for the blackmail letter to be examined.

The letter consisted of a sheet of A4 paper in a brown padded envelope.  The blackmail message was formed from words cut from newspapers and magazines pasted onto the paper and envelope, suggesting the sender had at least a degree of forensic awareness.

Both the blackmail letter and envelope showed signs of having been subjected to fingerprint treatments.  No useful contact marks from finger or palm contacts were visible on the front of the letter.  There were, however, several finger contact marks visible on the back of the blackmail letter.  In the main, these were poor quality, but two better quality fingerprints were, in our opinion, deemed suitable for comparison purposes and, potentially, sufficient for identification.

Police refused to provide the Complainant’s reference fingerprint forms for comparison purposes, but they did arrange for the fingerprints to be examined by their experts.  This confirmed that one of the marks had been identified to the Complainant.

Fingerprint treatments can continue to develop over time, which is what we believe happened in this case.  The marks simply may not have been as clearly visible after chemical treatments, leading the laboratory to their conclusion that nothing of evidential value had been found.  Photographs of the letter and envelope post-treatment could have allowed us to assess whether marks had been visible at that time or had developed at a later date.

Had our examination not taken place, the partial finger marks may never have been examined and valuable evidence would have been missed.

In light of this new evidence, the prosecution discontinued the case against the Mr M.

If you have a case involving fingerprint findings, positive or negative, please get in touch with Simon Bunter to discuss what examinations might be possible.  You can contact Keith Borer Consultants by telephoning 0191 332 4999 or emailing kbc@keithborer.co.uk.