Footwear marks – are you getting the whole story? 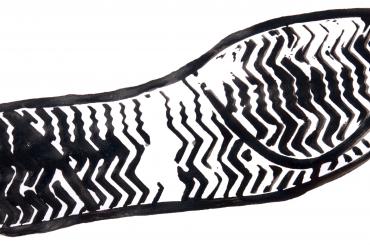 Footwear mark examinations can vary enormously, from simply coding the ‘pattern type’ of a mark and a suspect’s shoes to determine if they are worthy of further work, to carrying out full evidential comparisons.  Since our 2012 article (Footwear Marks – Intelligence or Evidence), an increasing number of police footwear mark units have gained UKAS accreditation and have the expertise to produce evidential statements.  However, we do sometimes still see what are essentially ‘screening reports’ which, in the absence of follow-up work, have become the de-facto evidence.  One such enquiry was received recently when we were requested to examine footwear mark evidence which amounted to a statement from a police technician.  Essentially he had conducted only a preliminary screen; coding the pattern of a crime scene mark and the tread pattern of the suspect’s shoes from photographs, and reporting that these were the same.  Whilst it is likely that he had expected his statement to have triggered a detailed evidential comparison, none had been carried out.  In this case the tread pattern was one commonly seen in casework and it had not been established whether the suspect’s shoes were the correct size to have made the mark, let alone whether they were appropriately worn.  Clearly, this type of statement should be challenged and a more detailed comparison conducted if the findings are to be alluded to at court.

More typically, Streamlined Forensic Report Stage 1 Results (SFR1) are produced, summarising a detailed comparison which has been conducted and reviewed by appropriately qualified experts.  Whilst legal teams are expected to advise on the basis of these, SFR1s provide no context for the reported result.  For instance, when the wear distribution on a shoe’s sole is unremarkable, a conclusion of moderately strong support for the proposition that a shoe could have made a mark may well be based largely on a correspondence of make, model and size (manufactured features common to thousands of shoes).

SFRs break up the evidence into small, discrete (affordable) packages, but only give part of the story.  In one recent case it had been reported that a mark on the victim of an assault “could have” been made by our defendant’s shoes and that a second mark “could not”.  However, on attending the prosecution provider’s laboratory and examining their case file, it was immediately obvious that they had produced a second SFR1 in the same case.  This result related to a co-defendant and reported that their shoes “could have” made both of the marks on the victim.  Our instructing solicitor had not been provided with this second SFR1 and was unaware of its existence!

If you have doubts concerning the evidential value of footwear mark evidence, or feel that something may be missing in your case, please contact Dr Guy Cooper or Alan Henderson via our Durham office, Dorothy Allan at our Huntingdon office, or email us at: kbc@keithborer.co.uk.