Can you determine when a diary entry was written? 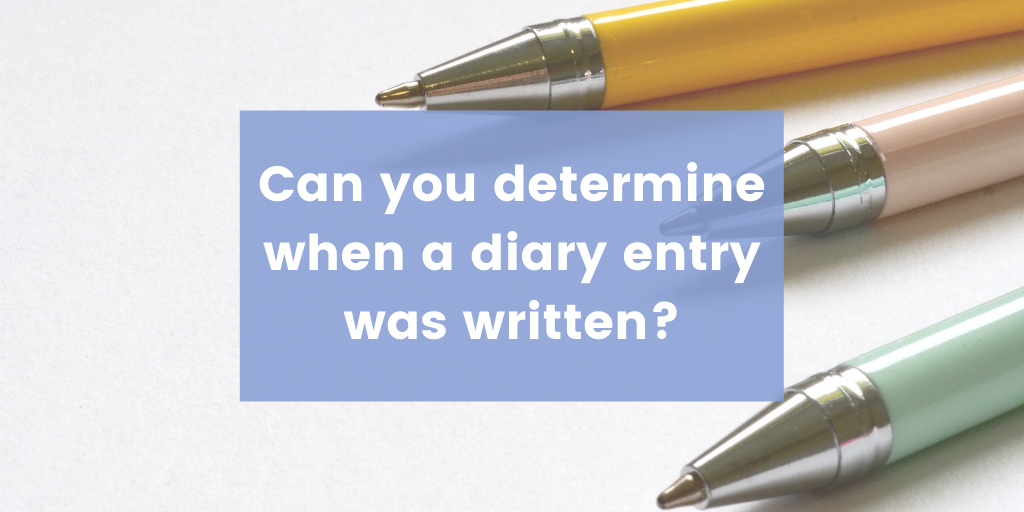 In a recent case involving the dating of entries within a diary, KBC document expert, Louise Floate, looked into the aging of ink on the basis of whether or not it was dry. You may be tempted to think that, if an entry was written in a diary years ago, the ink would be bone dry and so wet ink must mean a recent entry. Another expert certainly thought so. Read on to see what Louise found.

What techniques are available?

Much research has been carried out on the ageing and dating of inks. The majority of this research has involved determining the levels of particular solvents within inks using various analytical techniques such as gas chromatography coupled to mass spectrometry (GC/MS). However, in this case, another expert had used a novel and unvalidated technique in order to determine the age of the inked entries in question.

The expert examined ‘goops’ of ink within the questioned entries, these goops being blots of excess ballpoint pen ink deposited on the paper during writing. They considered that ink goops, even if fairly heavy, will dry up in a short period of time and it would be unusual to be able to smudge an ink goop after a period of more than three or four weeks. They went on to say that there was no conceivable way that a goop will remain in a smudgeable liquid form after a significantly longer period of time of months or years. These opinions were based on a small amount of unpublished research, carried out by this expert, years earlier.

There was no doubt that some entries in the diaries contained examples of ink goops in a smudgeable state. Based on what they had done previously, the other expert opined that the evidence showed conclusively that the entries were relatively recently written (within a number of weeks maximum), as opposed to being many years old. This was despite the fact that the diaries had been held by the solicitor for seven weeks before being sent to them for examination, something the other expert was not told about. The expert then extrapolated their opinion to say a number of weeks was reasonable, but months or years was not.

KBC expert, Louise Floate, received the diaries for examination. Most of them had been handed to the instructing solicitor five months earlier, however, two of the diaries had been in the solicitor’s possession for 11 months. Mrs Floate carried out her own examination of questioned entries within the diaries using the same technique as the other expert, that is rubbing ink goops with the rounded end of a paper clip. Mrs Floate found a number of entries that contained ink goops which could be smudged even though some were now at least 11 months old.

With KBC having been in business for 40 years, Mrs Floate turned to our own files and examined ink goops on older documents held in plastic wallets in files in our offices. She found one area of ink in a signature on a document was still in a smudgeable state almost 6 years after it had been made.

It shows how easy it is to make assumptions about what you may think would happen in a given situation, but forensic science is about testing theories, not making assumptions. By keeping an open mind and conducting appropriate studies, Louise Floate showed that, depending on the circumstances, it was possible for ink to still be smudged many years after it was written.

Keith Borer Consultants has a team of three specialists in handwriting and document analysis. They are regularly asked to verify the authenticity of signatures on wills, mortgage applications and other official documents. They are also instructed to consider alterations to documents, indented impressions and printed office materials. For more details, please visit the website www.thehandwritingexperts.co.uk or contact the team on 01480 432 794.