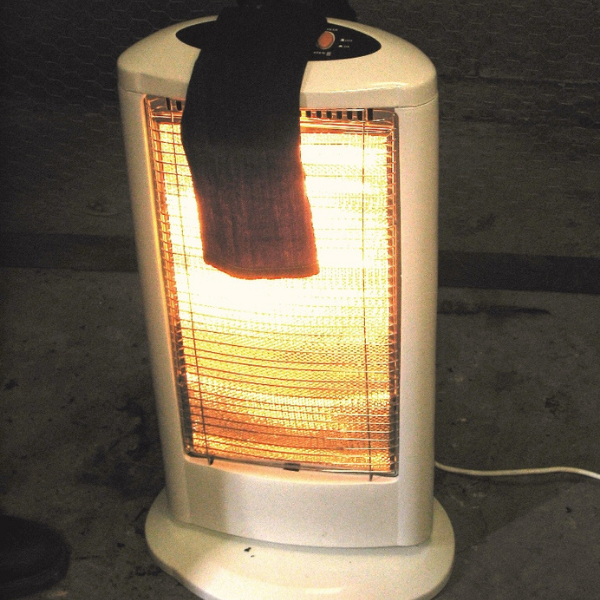 There is nothing quite the same as designing a test and seeing the results with your own eyes. We had to test a range of cotton based fabrics to see how they reacted when exposed to a heat source. We were interested at what distances they would start to show changes, and how close they had to be to the heat source in order to ignite. This was not to test the performance of the appliance, but rather to compare ignitability of different fabrics. The results were a little unexpected.

For our fabric testing we wanted something that had a reasonably uniform heat output so that the heat exposure at a given distance would be approximately the same for each fabric sample. We bought from Argos a Challenge 1.6kW Halogen Heater (note that this style heater also appears as a Lloytron model in at least one other store). We assumed this 4 bar heater would have sufficient power in it to ignite cotton based materials in close proximity.

The heater is made with 4 ‘instant heat’ elements and the operator can switch 1, 2, 3 or all 4 elements on. There is an oscillating function that was not used in our test and the base of the heater incorporates a small plunger switch that operates as a safety cut-off if the heater falls over. In front of the heating tubes is a metal baffle and then in front of that a metal cage.

We powered up a single element (400W) and draped a strip of 100% cotton denim fabric over the top of the heater so that it hung down over the front resting on the cage with the lighter coloured side facing the heat, and waited. After 3 minutes nothing had happened. We then switched on 3 heaters (1.2kW). The lowest element was not switched on given its distance from the test fabric. After a minute or so, fine smoke was seen along with a slight smell of burning. This continued for a few minutes then stopped. No further effects were noted. After 3 minutes we removed the fabric and it bore no visible sign of burning.

The denim was turned over so the dark blue side faced the heat. This caused more rapid smoke production but it was still very light, and after a few minutes ceased. After 3 minutes the fabric was removed and again no damage was noted.

Cotton fabrics are usually easy to ignite. We bought a heater with what we expected would be ample capability to act as an ignition source only to find that when placing fabric on the heater’s cage (the closest position to the heat without going inside the protective cage) the material could not be ignited within 3 minutes and showed no signs of scorching or charring in this time.

The inclusion or exclusion of items as possible causes is an inherent part of fire investigation. In this basic test we found what we thought was an obvious fire source being surprisingly ‘safe’. There may be a number of ways that this heater could cause a fire, but leaving cotton fabric draped over the top doesn’t seem to be one of them.

Had we been faced with a fire case where the occupant said he left a pair of jeans on top of one of these heaters and it caused a fire, we might have assumed it reasonable. Now having tested the heater, we would have to consider alternative scenarios.