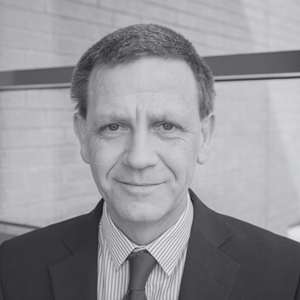 Dr Cooper has a background in chemistry, microscopy and mineral physics. He mainly specialises in the comparison of footwear and tool marks, and cases involving the transfer of particulate materials such as glass and paint fragments. These transfer type cases require an understanding of analytical chemistry, the use of databases and the mechanisms affecting the transfer and persistence of such particles. In relation to this he has carried out research into the indirect transfer of glass fragments which can result in glass fragments from one location ending up on an item of clothing which has never been to that location. Dr Cooper has published this research in Science & Justice (Vol.52, 166-170 2013).

In the last few years, footwear mark evidence is often reported in Streamlined Forensic Report (SFR) format. Dr Cooper not only scrutinises the integrity of the reported comparisons, but explains what the forensic scientists’ conclusions (which can often sound more significant than the evidence suggests) are based on. Where presence at a scene is accepted, Dr Cooper can assess competing prosecution and defence scenarios by examining the positions and orientations of the various marks within the scene.

In the current climate, police forces are increasingly failing to recover forensic evidence or not submitting it when it is recovered. Such items together with scene photographs can be examined at KBC on request. Following examinations of this type, Dr Cooper has been able to demonstrate that police officers’ statements linking keys to a padlock, shoes to crime scene marks, and individual footwear marks reportedly showing a trail from A to B, were simply wrong. Where no evidence is collected and no photographs taken, Dr Cooper can provide a report commenting on best practice and abuse of process, as he did in a case where a police officer reported a smear of paint on a suspect’s car following an accident, but no photographs or paint samples were collected before both vehicles were repaired.

He has the following qualifications: BSc (Hons) Chemistry with Geochemistry, PhD (Crystallography), Chartered Chemist and Member of the Royal Society of Chemistry (CChem and MRSC). Before joining KBC in 1995, Dr Cooper worked as a Research Fellow in the Department of Physics at the University of York.

Dr Cooper can be contacted at our Durham Office.